The event that was never supposed to happen, happened.  In a surprise upset, the people of the United Kingdom voted in favor of leaving the European Union.  This triggered an avalanche of selling across global markets, all of which had rallied in anticipation of the “sure thing” win for the “Remain” side.  On Friday the Dow plunged -610 points, erasing substantial gains from earlier in the week and a lot more, closing at 17,400, down -1.55%.  The tech heavy NASDAQ composite fell -92 points, ending the week at 4,707, down -1.9%.  The LargeCap S&P 500 dropped ‑1.63%.  MidCaps and SmallCaps also lost ground, with the S&P 400 MidCap index giving up -1.5%, and the Russell 2000 small cap index also lost -1.5%.  In a flight to safety, the defensive Utilities sector managed to avoid much of the carnage, down only -0.13%.  The week’s declines brought the S&P 500, the Dow Jones Industrials, and the small cap Russell 2000 index all back into negative territory for the year to date (where the NASDAQ already was).

In international markets, Canada’s TSX fared relatively well with only a slight decline of -0.07%.  In Europe, somewhat surprisingly the United Kingdom’s FTSE actually ended up at +1.95% (helped considerably by the plunge in the British Pound).  However, on Europe’s mainland, Germany’s DAX ended down -0.77%, France’s CAC 40 gave up -2.08%, and Italy’s Milan FTSE plunged over -7%.  In Asia, markets were mixed with China’s Shanghai Stock Exchange losing -1.07% and Japan’s Nikkei plunging over -4.15%.  However, Hong Kong’s Hang Seng Index rose +0.44%.

In U.S. economic news, the number of Americans filing for unemployment benefits fell to a near-43 year low as weekly jobless claims fell 18,000 to 259,000.  Economists polled by Reuters had forecast initial claims falling only to 270,000.  Claims have now been below 300,000, a commonly accepted threshold of a strong job market, for 68 straight weeks-- the longest streak since 1973.  Continuing claims, a reading on the number of people receiving ongoing unemployment assistance, also fell by 20,000 to 2.14 million last week.

In housing, U.S. existing-home sales rose at the fastest pace since 2007.  The National Association of Realtors reported that sales were up +1.8% last month to a seasonally-adjusted annual rate of 5.53 million.  In addition, prices climbed to a new all-time high.  The national median sales price for a previously owned home rose +4.7% from a year earlier to $239,700.  Existing home sales make up roughly 90% of the housing market.  Gregory Daco, head of US macroeconomics at Oxford Economics, stated that “housing demand is likely to remain solid in the coming months, underpinned by gradually strengthening wage growth and low mortgage rates.”

In contrast to existing-home sales, however, new-home sales declined -6% to an annualized 551,000 in May, according to the Commerce Department.  The pullback wasn’t completely unexpected due to the outsized jump in new-home sales in April.  While new-home sales are volatile and subject to heavy revision analysts point out that the overall trend remains up.  The median price of a new home was $290,400, up 1% from a year ago.  Throughout this tepid economic recovery homebuilders have been reluctant to resume the blistering pace of home-building that occurred prior to the housing bust.

In manufacturing, the Chicago Fed’s national economic index dropped sharply as factory output slowed.  The index fell to -0.51 last month from a positive 0.05 in April.  Most economists had expected an improved reading.  The Chicago Fed index is a weighted average of 85 different economic indicators.  All four broad categories of indicators decreased from April as weakness was broad-based.  The index’s three month moving average, used by analysts to offer a clearer picture of the trend in economic activity, fell to -0.36, the lowest since August 2012.

In contrast to the Chicago Fed’s national report, the Kansas City Fed’s Regional Manufacturing Index rose +7 points to a positive 2 for June-- the first positive reading in 18 months and all components were at their strongest levels for 2016.  Specifically, the report noted a sharp improvement in the production index to 12 from -11 the previous month, with the components for shipments, new orders, and order backlogs all rising strongly.

American businesses were pulling back from purchasing new equipment as new orders for durable goods—airplanes, industrial machinery, and other products that are designed to last at least 3 years - fell a seasonally-adjusted ‑2.2% last month, according to the Commerce Department.  That was a sharper decline than the ‑0.4% economists had forecast.  While the drop was led by a -34% plunge in military-aircraft orders, orders were down across the board.  Ex-transportation, orders fell -0.3%, and ex-defense spending, orders fell -0.9%.  Barclay’s economist Jesse Hurwitz wrote in a note to clients that the report showed “broad-based and persistent softness across the U.S. manufacturing sector.”  New orders for non-defense capital goods (a proxy for future business investment), also fell -0.7%.

The huge drop in the value of the British Pound was the single biggest move, hitting the lowest level versus the U.S. dollar since 1985.

The Eurozone manufacturing sector bounced in June.  Markit’s Flash Manufacturing Purchasing Managers Index (PMI) rose to 52.6 in June, up +1.1 points from May and well above the expectation of 51.3.  However, while manufacturing improved, the composite (manufacturing +services) PMI fell to a 17-month low of 52.8, down -0.3.

The German stock index, the DAX, fell -1000 points after the Brexit vote, the biggest drop since the financial crisis in 2008, and finished the day down -700.  Key business groups in Germany have said that the uncertainty will hit the German economy particularly hard.  The president of the Federation of German Wholesale, Foreign Trade and Services, Anton Barber said “Brexit has happened in a time of uncertainty.  That is poison for the economy.”  German industry is particularly concerned about any effects on trade with the UK, which is its third-biggest export market.

In Japan, representatives of the Japanese government and the Bank of Japan are set to hold meetings over the weekend to analyze the economic impact of Britain’s exit from the European Union.  The focus of the meeting will be its impact on the global economy, negative effects on the yen, and the interests of the many Japanese companies on British territory.  Japanese finance minister Taro Aso said his government will take “firm action on the yen, if needed”, however he stopped short of promising currency intervention or whether Japan had already intervened in the market.

In China, analysts are concerned that China may feel the effects of the “Brexit” vote particularly strongly.  Over the years, Britain has played a significant role in promoting Chinese relations with the European Union, which has become China’s largest trading partner.  Britain’s exit may lead to difficult trade and investment agreements between China and the bloc.  He Weiwen, co-director of the China-US-EU Study Centre under China’s Ministry of Commerce stated “The European Union [without the presence of Britain] is likely to adopt a more protectionist approach when dealing with China.  [The cooperation between China and the EU] may become more difficult.”

Finally, attempts at forecasting future market returns over coming 10-year periods have mostly focused on measurements of market valuation. The well-known Cyclically-Adjusted Price-to-Earnings ratio (CAPE) is a prominent example.  Another is Warren Buffett’s favorite: US stock market capitalization divided by US GDP.  Both have good records of predicting future returns when at high or low extremes – and both are predicting poor returns over the next 10 years.

But one with an even better statistical correlation to future returns (an “r-squared” of 0.91, for you geeks), does not use market valuation at all!  Rather, it is based on the percentage of all household financial assets that are invested in the stock market.  The higher the percentage, the lower future returns.  Currently, households are at the high end of the historical range, at 52% vs the long-term median of 44%.  This level portends future 10-year annualized returns of slightly less than 4%, joining the late 60’s, 2000 and 2007 as years with similar readings. 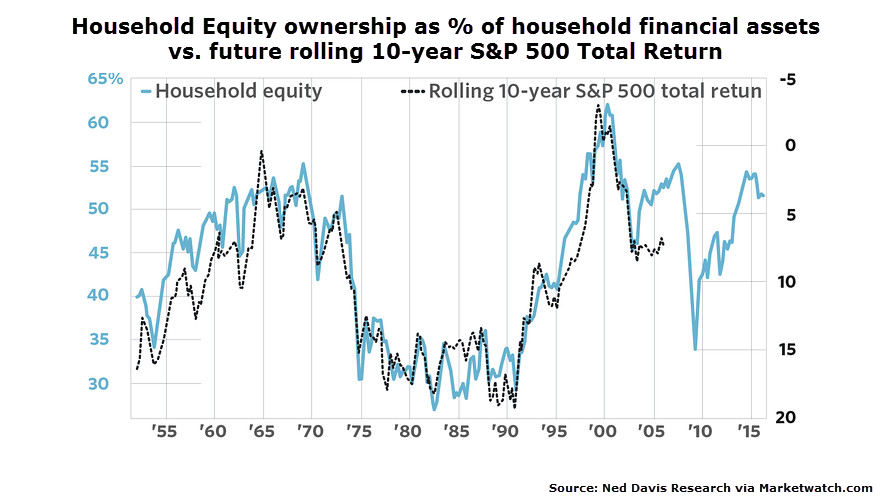