In U.S. economic news, jobless claims unexpectedly jumped to a 1-year high as applications for unemployment benefits increased last week to the highest level since February 2015, a sign that progress in the job market is beginning to taper.  Initial jobless claims rose 20,000 to 294,000 last week, according to the Labor Department.  The median forecast called for a decline to 270,000.  The number suggests a more modest recovery lies ahead as companies reduce headcount after a first-quarter slowdown in demand.  However, Jacob Oubina, senior U.S. economist at RBC Capital Markets, noted that “New York accounted for most of the increase”, and was related to the Verizon strike concentrated in that state.  “It’s not a clean read.  The labor market is looking pretty healthy and that’s going to continue”, he asserted.  The number of people continuing to receive jobless benefits rose by 37,000 in the week ended April 30 to 2.16 million, the biggest increase since the end of November.

Small businesses seem to have plenty of openings, but can’t fill them.  The National Federation of Independent Business reported that small-business owners were more upbeat last month, with job openings near a business cycle high, but finding qualified applicants continues to be a major problem.  NFIB’s Small Business Optimism Index rose 1 point last month to 93.6, ending a 3-month downtrend.  11% of firms plant to add staff, up +2% from March.  A net 29% of firms have job openings, but actual hiring has been weak.  A whopping 46% of small businesses said they had few or no qualified applications for open positions, and 12% reported that this shortage of qualified workers is their number one problem.

Retail sales posted their biggest gain in a year, up +1.3% last month according to the Commerce Department.  The report eased some fears about consumer spending following a string of weak earnings reports from Apple, Macy’s, Kohl’s, and Nordstrom.  Economists had expected a +0.9% gain after falling -0.3% in March.  Even more encouraging, retail sales (ex-autos and gas sale)s were up +0.6% and a solid +4.4% year over year.  The Atlanta Fed’s GDPNow indicator ticked up to a 2.8% annualized GDP reading after taking the latest retail sales numbers into account.  This year’s GDP is on track for another roughly 2% growth rate, anemic at best.

In Europe, Eurostat (the statistical arm of the European Union) reported a +0.5% increase in Eurozone GDP over last quarter and an annualized growth rate of 2.1%.  However, most economists believe that growth will be more realistically at the 1.5% level.

The Bank of England cut its growth outlook for the UK for 2016 through 2018 as it simultaneously announced no changes to its policies.  Members voted unanimously to keep the main rate at 0.5% and keep the bank’s stock of purchased assets at $543.4 billion.

French first-quarter GDP rose +0.5% (+1.3% year over year).  Industrial production in March was down -0.8%.  Last week, the French government bypassed its own parliament and forced through a jobs bill designed to bring some flexibility to France’s notoriously inflexible labor market.  Lacking parliamentary backing to pass the legislation, Prime Minister Manuel Valls was authorized by President Francois Hollande to force through the reform without a vote.

In Asia, China’s exports fell -1.8% last month after rising +11.5% in March.  Imports were down -10.9% following a ‑7.6% decline the prior month.  Even worse, China’s investment, factory output, and retail sales all grew less than expected in April and added doubt about whether the world’s second-largest economy is stabilizing.  Growth in factory output cooled to +6% in Aprilaccording to China’s National Bureau of Statistics, missing analyst expectations of a +6.5% rise.  Zhou Hao, economist at Commerzbank in Singapore, remarked “It appears that all the engines suddenly lost momentum, and growth outlook has turned soft as well.”

In Japan, Bank of Japan Governor Haruhiko Kuroda said that the central bank will act “decisively” to achieve its 2 percent inflation target, stressing that is still has “ample” policy options available if it were to expand stimulus again.  Kuroda defended the BOJ’s decision last month to hold off on further easing, saying that more time was needed for the effects of previous easing measures to be detected in the economy.

Finally, we take a look at the continuing devastation occurring in the energy industry following oil’s 13-year low earlier this year.  On Wednesday, Houston-based Linn Energy filed for bankruptcy, becoming the biggest U.S. casualty of the collapse in oil prices.  Linn sought to restructure debts of $9.2 billion to “provide a platform for future growth”, according to the CEO.  At last check, some 69 North American oil and gas producers have filed since the beginning of 2015 according to a recent report from law firm Haynes and Boone.  Last month was the worst so far, with 11 new Chapter 11 bankruptcy filings.  The website Visual Capitalist created the following “infographic” to demonstrate the worsening carnage in the oil sector – and how truly big players are now joining the crowd on the courthouse steps.

As the infographic depicts, earlier bankruptcies were confined to the smaller players in the space with total debt load below $100 million.  However, last month the situation deteriorated to the point where 4 firms with greater than a billion dollars in debt sought bankruptcy protection.  And there are more to go, according to consulting and accounting firm Deloitte, which concluded that about 175 companies in total are at risk of insolvency. 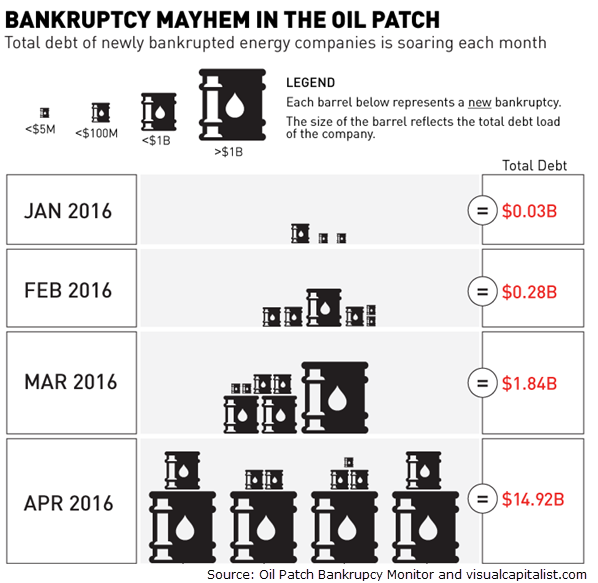