The National Association of Home Builders’ Housing Market Index was unchanged last month at 58.  Economists had expected a 1 point rise.  Readings over 50 signal optimism among home builders.  The Commerce Department reported that housing starts rose +6.6% last month to 1.172 million units, but were down -1.7% versus a year earlier.  Economists had expected housing starts to rise 1.135 million units.  Building permits, used as gauge of future activity, rose +2.6% to 1.116 million but missed expectations for 1.130 million.  Sales of existing homes did better than permits and starts, rising last month +1.7% to a 5.45 million annualized pace according to the National Association of Realtors, beating forecasts for 5.4 million.  The median home price was $232,500, up +5% over last month and +6.3% vs. a year earlier.

The Labor Department reported that consumer prices rose +0.4% in April, the biggest gain in 3 years.  Gasoline costs spiked nearly 10% as energy costs continued to climb.  Core CPI (ex- food and energy) rose +0.2%, which was in line with expectations.  Year over year, CPI climbed +1.1%, while core CPI rose +2.1%.  The Federal Reserve has set its inflation target at +2%, but its preferred inflation gauge, the core PCE deflator, was up only +1.6% its latest reading.

In U.S. manufacturing news, the New York Fed’s Empire State Manufacturing Index plunged -18 points to -9.02 in May from April’s 9.56, widely missing analyst expectations of 7.  New orders, shipments, and prices received all turned negative as well.  In the city of brotherly love, the Philadelphia Fed manufacturing index was -1.8 this month vs. -1.6 in April, missing expectations of a rise to 3.  The new orders gauge was -1.9 after a flat April.

Industrial production jumped +0.7% last month, according to the Federal Reserve.  It was the best gain in more than a year and beating expectations of a +0.2% rise.  On a negative note, March’s decline was revised downward to a steeper loss of -0.9%.

The Conference Board’s Index of Leading Economic Indicators (LEI) rose +0.6% to 123.9 in April, beating estimates for a +0.5% gain.  It was the first rise since November.  Comprised of 10 components, including the S&P 500 price change, manufacturers’ new orders, and housing permits, the index is meant to signal swings in the business cycle and smooth out some of the volatility of individual components.  Ataman Ozyildirim, director of business cycles and growth research at The Conference Board stated, “The U.S. LEI picked up sharply in April, with all components except consumer expectations contributing to the rebound from an essentially flat first quarter.”

On Wednesday, the minutes from the Fed’s April policy committee meeting were released and they surprised many traders.  In March, Fed Chair Janet Yellen gave a speech in which she stated that “caution is especially warranted” when it comes to raising rates with global risks so high and policymakers so low on conventional ammunition to counteract a downturn.  But the minutes revealed a much more hawkish consensus within the Fed.  Most participants agreed that an interest-rate increase would be appropriate in June if the economy continued to improve.  From the minutes: “Most participants judged that if incoming data were consistent with economic growth picking up in the second quarter, labor market conditions continuing to strengthen and inflation making progress toward the committee’s 2% objective, then it likely would be appropriate for the committee to increase the target range for the federal funds rate in June.”  On Thursday, New York Fed President William Dudley reinforced that notion, saying at a press briefing that “a tightening in the summer, the June, July timeframe is a reasonable expectation.”

In Canada, slowing car sales and inflation stuck below the central bank’s target points to gathering softness in Canada’s economy.  Retail sales fell -1% in March, worse than the +0.6% forecasted According to Statistics Canada.  Receipts at new car dealers fell -3%, as well as sales of furniture, building materials, and food and beverages.  Leslie Preston, an economist at Toronto Dominion Bank stated “the retail data just shows, there isn’t a lot of momentum in the Canadian economy as we headed into the second quarter, and we have the uncertainty of the shutdowns related to the Alberta wildfires.”  Canada’s dollar touched a 6-week low as Friday’s data contributed to the list of economic setbacks.

European equities rose as strength in commodities, bank, and energy stocks offset concerns about an earlier than expected US Federal Reserve interest-rate hike.  Preliminary estimates from the European Union’s statistics agency reported that consumer prices in April were down -0.2% from the same time last year.  April was the second month this year that the Eurozone was in deflation.

In the United Kingdom, a leading credit ratings agency warned that a British exit (“Brexit”) from the European Union could eventually lead it to downgrade the ratings of multiple EU countries as well as Britain.  In a report, Fitch Ratings said a vote in favor of a “Brexit” from the European Union would weigh on the economies of multiple EU countries and increase political risks in Europe.

The International Monetary Fund (IMF) is demanding that Europe release Greece from all payments on its bailout loans until 2040.  The new IMF proposal, shared late last week, goes far beyond what Greece’s Eurozone creditors, led by Germany, have said they are willing to do to help the country regain its financial health.  Germany is returning the pressure on the IMF to dilute its demands and rejoin the Greek bailout program as a lender instead of an opinionated spectator.

In Japan, first quarter GDP rose +0.4% on a quarter-over-quarter basis and +1.7% year-over-year, both measures beating expectations.  The Japanese economy again avoided official recession as gains in government and consumer spending outweighed a decline in business investment.  But, according to a poll of 10 private organizations conducted by the Nikkei, economic growth is forecast to contract -0.4% in the April through June quarter.

A series of Chinese economic reports showed that the country’s economy slowed again after a temporary pickup in March.  Gauges of industrial production and retail sales as well as fixed asset investment all missed analyst expectations.  Some interpretations of the reports were positive, however, insisting that China’s growth is moderating as opposed to coming to a sudden halt and are less negative than the headlines would suggest.

Finally, a recent paper by Rob Arnott of Research Affiliates puts the spotlight on the “hollowing out” of the U.S. middle class.  Entitled “Where’s the Beef?  Lies, Damned Lies, and Statistics”, the paper notes that American households, which have been “pinched’ by rising prices at a higher than headline inflation, have generally not benefited from the unrelenting stimulus of quantitative easing and zero interest rates and instead have experienced a decade of zero growth in income and spending power.  For example, the price of beef has soared over the past 5 years—up 80% cumulatively at the end of last year, but the official U.S. Consumer Price Index (CPI) is up only 7%, or 1.4% a year.  Despite what the official numbers may say, surveys suggest that the average American’s daily experience is one of going backward.

For average Americans, the four biggest expenses are rent, food, energy, and medical care, in approximately that order.  These four expenses have been increasing at a faster rate than headline CPI, which simply ignores two of them and minimizes the others.  According to the BLS, these four components comprise about 60% of the “aggregate population’s consumption basket”, but for struggling Americans, it’s closer to 80%, and for the working poor can reach as much as 90% of total spending.

The middle class is being squeezed by rising costs and almost no gains in real income—and consequently the middle class is disappearing.  As the following graph depicts, 53% of American considered themselves middle class in 2008.  But just six years later, that number had plummeted to 44%.  At this rate of decline there would be no middle class at all in 30 years!  The largest move was among those self-identifying as “Lower Class”, rising from 2008’s 25% to today’s 40%, a rise of an astounding 15 percentage points.  Even the self-identified “Upper Class” reported a drop, from 21% to 15% of the populace. 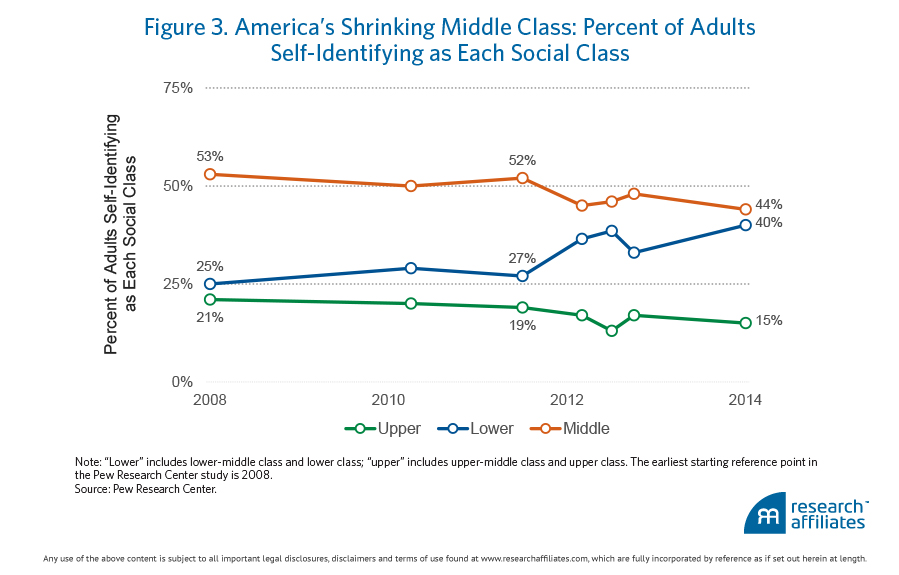