The U.S. major indexes finished the week mixed.  The large cap indexes were flat to modestly lower, while the NASDAQ and smaller-cap indexes notched a fifth consecutive week of gains.  The Dow Jones Industrial Average declined ‑138 points to 18,432, down -0.75%, while the NASDAQ composite rose +1.22% to end the week at 5,162.  The LargeCap S&P 500 index was down fractionally, -0.07%, while MidCaps and SmallCaps rose +0.46% and +0.58% respectively.  The S&P MidCap 400 moved further into record territory, and is the best performer year to date.  The NASDAQ was the biggest gainer of the week, helped by strong earnings reports from Google (aka “Alphabet”) and Amazon.

In U.S. economic news, the number of Americans filing for unemployment benefits rose slightly to a seasonally-adjusted 266,000 last week, according to the Labor Department.  Economists had forecast a rise of 260,000.  Claims have remained below 300,000, the threshold associated with a healthy labor market, for 73 consecutive weeks.  The smoothed 4-week average of claims, considered a better measure as it irons out week-to-week volatility, fell 1,000 to 265,500—the lowest level since April.

The Case-Shiller National Home Price index for May declined to 5.2% from 5.4%, missing consensus forecasts by 0.1%.  On an annual basis, home prices remained at a +5% rate of growth.  Analysts suggest that low long-term interest rates will continue to support the housing market, but there is some evidence that prices may be reaching levels that average homebuyers will find out of reach.  Portland continued to see the biggest annual increase, up +12.5%.  Seattle and Denver rounded out the top three, up +10.7% and +9.5%, respectively.  David Blitzer, managing director of the index committee at S&P Dow Jones Indices, noted that regional patterns are shifting.  The Pacific Northwest is now booming, and has overtaken the previously strongest areas of Los Angeles, San Diego and San Francisco.

New-home sales rose to a seven year high, signaling continued robust demand in the housing market.  June new-home sales rose by +3.5% to a seasonally adjusted annual rate of 592,000, according to the Commerce Department.  It was the strongest reading since February 2008 and beat forecasts by 32,000.  The median price jumped to $306,700 last month, 6% higher than this time last year.  Supply fell to a 4.9 month supply of homes at the current sales pace.  Lawrence Yun, the chief economist of the National Association of Realtors, warned than an inadequate supply of homes for sale is frustrating prospective buyers.  Regionally, sales weakened slightly in the Northeast and South, but surged by more than +10% in the West and Midwest.

The Conference Board reported that consumer confidence was little changed this month, coming in at 97.3, down ‑0.1 point.  Economists had expected the index to fall further, to 95.5.  Lynn Franco, director of economic indicators at the Conference Board stated “consumers were slightly more positive about current business and labor market conditions, suggesting the economy will continue to expand at a moderate pace.”

Like the Conference Board report, consumers’ attitudes weakened slightly according to the University of Michigan’s Consumer Sentiment survey.  The index hit 90, slightly lower than expectations and down ‑3.5 from June’s final reading.  The monthly survey of 500 consumers measures attitudes toward topics like personal finances, inflation, unemployment, government policies and interest rates.  Richard Curtin, the survey’s chief economist, cited increasing concern among upper income households about economic prospects and lingering worries about Britain’s decision to leave the European Union.

Activity in the U.S. service sector declined slightly, according to an early read of the services portion of July’s Purchasing Managers Index (PMI) of 50.9, down -0.5 from June.  Expectations had been for a reading of 51.2.  While the services sector rose at a weaker pace, the composite services + manufacturing index improved to 51.5, up +0.3 point, indicating a modest pickup in the rate of output growth.

Durable goods orders fell -4% in June, the steepest drop in almost 2 years and the second straight month of negative readings.  Analysts had expected a -1.7% decline.  Durable goods are those which are expected to last 3 years or longer and serve as a good barometer for large capital expenditures and therefore the overall health of the U.S. economy.  Even after removing the volatile transportation component, durable goods orders still fell ‑0.5%.

U.S. GDP grew at a disappointing 1.2% annualized rate in the second quarter, according to the Commerce Department—far below economists’ expectations.  Economic growth is now tracking at a 1% rate of growth in 2016, the weakest since 2011.  Since the end of the recession, the average annual growth rate has been 2.1%, the weakest pace of any expansion since 1949.  Gregory Daco, economist at Oxford Economics stated “Consumer spending growth was the sole element of good news…weakness in business investment is an important and lingering growth constraint.”  Business investment fell -2.2%, its third consecutive quarterly decline.

On Wednesday, the Federal Reserve left interest rates on hold as expected, but did state that a September Fed Funds rate increase could still be on the table.  According to the statement, near-term economic risks to the economy have diminished and the committee will continue to closely monitor inflation indicators and global and economic developments.  “Information received since the Fed policy committee in June indicates that the labor market strengthened and that economic activity has been expanding at a moderate rate,” the Fed reported.  Kansas City Fed President Esther George, who was in favor of an immediate rate hike, was the lone dissenter.

In international economic news, Canada’s GDP shrank by -0.6% in May, the worst monthly GDP figure since March 2009.  Wildfires in Alberta and a slowdown in manufacturing contributed to the decline, according to Statistics Canada.  Non-conventional oil and gas extraction declined by -22% due to the Fort McMurray fires.  Output from the western oilsands fields is now at its lowest level since May 2011.

In the United Kingdom, government bond yields fell to new lows as expectations increased that the Bank of England will cut interest rates at its monetary policy meeting on August 4 and possibly restart quantitative easing.  On Friday, the yield on the benchmark 10-year U.K. government bond was 0.74% while the 10-year note in the U.S. is about double that, at 1.45%.

European Union bank stocks rose at the end of the week in anticipation of the forthcoming results from stress tests for 51 lenders across the European Union.  The European Banking Authority will publish the results this weekend.  Across the Eurozone, second quarter GDP slowed to 1.2%, down -1% according to EU statistics agency Eurostat.  However, the pace of growth was 0.3% higher when compared to the first quarter.

The German DAX was the latest index to recoup all of its losses since the Brexit vote.  German unemployment continued to decline—an indication that Europe’s largest economy is showing resilience despite the Brexit vote.  The number of people out of work declined 7,000 to 2.682 million according to the Federal Labor Agency in Nuremburg.  The jobless rate remained at a record low 4.2%.

­Finally, mutual fund giant Vanguard recently released a report entitled The Global Case for Strategic Asset Allocation and an Examination of Home Bias.  Home bias is the tendency of a nation’s investors to invest the majority of their assets in their own nation’s equities regardless of how much or how little their own home nation represents as a % of total global assets.  In the report, summarized in the chart below, Vanguard notes that U.S. stocks make up 50.9% of global market capitalization, but U.S. investors have an average of 79.1% of their equity holdings in American stocks - an apparent “overweighting” of American equities relative to the rest of the world.  But Americans are nowhere near the most imbalanced.  Canadians, for example, are much more imbalanced, having over 59% of their assets invested in Canada while Canada comprises only 3.4% of global market cap, and Australians are the worst by this measure, having over 66.5% of their assets invested in Australia, which is only 2.4% of global market cap! 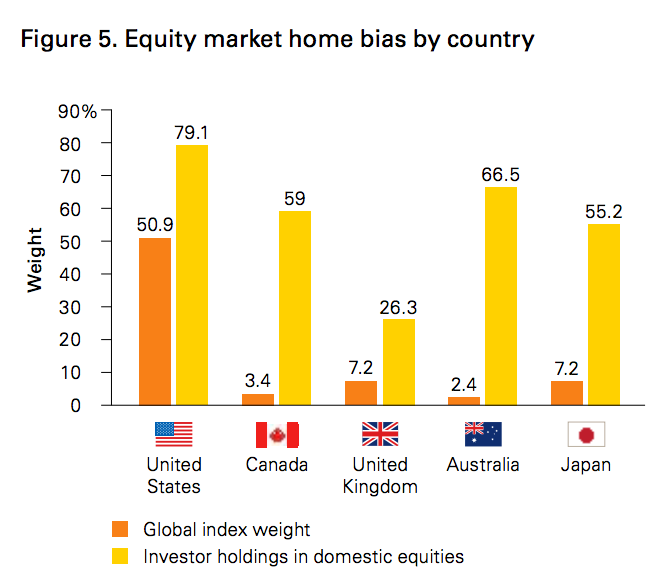