In international markets, the big move came from Japan where the Nikkei went vertical for 5 straight sessions, shooting up over +9.2% on expectations of renewed stimulus after the re-election of Prime Minister Abe.  Markets around the world were almost all positive last week.  Canada’s TSX rose +1.56%, while the United Kingdom’s FTSE gained +1.19%.  On Europe’s mainland, all major indexes experienced significant gains.  Germany’s DAX rose +4.54%, France’s CAC 40 was up +4.34%, and Italy’s MIB gained +4.25%.  In Asia, China’s Shanghai composite rose +2.2% and Hong Kong’s Hang Seng composite ended up +5.33%.

In economic news, the latest Job Openings and Labor Turnover survey (JOLTS) data from the Labor Department reported a significant decline in job openings to 5.5 million in May - lower than the 5.75 million expected, but still an improvement over May’s numbers.  The overall hires rate continued to outpace the total number of separations for the month which implies an increase in overall employment.  Job openings declined in the manufacturing and wholesale trade sectors, but there was an increase in retail trade openings.  On the hiring side, education and health care continued their resilience.

The Labor Department reported the number of Americans who applied for unemployment benefits last week remained unchanged at 254,000, further evidence that the US labor market remains sound.  Applications for unemployment benefits remain near a 43 year low, and claims have been below the key 300,000 threshold for 71 weeks, the longest stretch since 1973.  However, job creation has tapered off to monthly rate of 172,000 from 229,000 last year.  Continuing jobless claims, those already receiving unemployment benefits, rose 32,000 to 2.15 million in the week ended July 2.

Optimism among U.S. small-business owners rose for the third-straight month, according to the National Federation of Independent Business (NFIB).  The optimism sub-index rose +0.7 point to 94.5, beating consensus expectations of 94.0.  Only 3 of the 10 components declined in June, and the biggest increase was in the number of respondents who expect the economy to improve.  Small-business owners continue to have trouble finding qualified workers:  more than half reported hiring or attempting to hire, but 48% reported no or few qualified applicants for open positions.  For 15% of respondents, the single biggest issue is the inability to find qualified workers.

Retail sales rose +0.6% last month, the third straight monthly gain.  Economists had forecasted only a +0.1% increase.  Sales in home and garden centers and building supplies led the way up +3.9% - the biggest increase since 2010.  On the downside, sales at apparel and clothing stores fell -1%.  The report is evidence that consumers are continuing to spend at a healthy clip, supporting the US economy.

Consumer prices rose for the 4th straight month, up a seasonally adjusted +0.2% last month, according to the Labor Department.  The cost of gasoline, rent, and medical care continued to rise.  Gasoline accounted for much of the increase in inflation last month as energy prices rose +1.3%.  Core consumer prices, ex-food and energy, also rose +0.2% in June.  Overall, inflation remains tame, as the Consumer Price Index has risen just 1% in the past 12 months.

A key report on New York-area manufacturing conditions fell in July.  The Empire State general business conditions index fell -0.6 point to 5.4, according to the New York Fed.  The index is based on a scale where any positive number indicates improving conditions.  Manufacturing has faced a strong headwind from the strength in the U.S. dollar, which makes manufactured goods from the U.S. more expensive overseas.  The new orders component plunged to -1.8 from a positive 10.9, and the shipments index was just barely positive from a previous 9.3.  The Empire State index is the first in a series of regional manufacturing reports.  Economists will be looking at subsequent reports for confirmation of the health (or lack thereof) of the manufacturing sector.

Total industrial production in the U.S. increased +0.6% last month according to the Federal Reserve Board.  Analysts had only expected a gain of +0.3%.  Manufacturing output climbed +0.4%, with gains largely attributed to an increase in motor vehicle assemblies and utility output.  Capacity utilization for the industrial sector rose to 75.4%, beating expectations by +0.3%.  Despite the increase, capacity utilization remains 4.6% below the long-term average of 80% from 1972 to 2015.

The latest Federal Reserve Summary of Current Economic Conditions, known as the “Beige Book”, revealed that consumer spending was showing “some signs of softening” last month.  Overall the survey found that growth was continuing at a “modest pace” across most of the Fed’s 12 districts.  In the report, manufacturing was described as “generally improved”, and labor market conditions “remained stable”.  Of concern, the survey found that sales were declining or mixed in almost half of the districts.  No regions reported strong sales and the most optimistic regions reported that sales saw “modest to moderate” growth.  Federal Reserve officials are relying on the resilient U.S. consumer to offset weakness in exports and in the energy sector and keep the economy on track for 2% growth this year.

In Canada, prices for new homes surged +0.7% in May on the heels of a +0.3% gain in April.  Market expectations were for only a +0.2% monthly gain.  The monthly increase was the largest since July 2007, and the annualized increase of +2.7% was the highest reading since September 2010.  The Bank of Canada has made frequent references to the housing market in financial stability reports and monetary policy reports.  The improvement in home prices should alleviate some of the concerns of overall stability.

In the United Kingdom, the Bank of England left rates unchanged, but left the door open for possible action in August.  In its latest meeting, the Monetary Policy Committee voted 8 to 1 for unchanged policy.  The committee also voted unanimously to leave the amount of government bond purchases unchanged.  Analyst expectations had been for a +0.25% cut from its current +0.5% level.  According to the statement, there are early indications that companies are starting to delay investment projects and postpone recruitment in reaction to the Brexit vote, and that could lead to monetary policy action in August.

In the Eurozone, industrial production dipped -1.2% in May, weaker than the -0.8% decline expected.  All categories declined, with the sharpest declines in energy production and capital goods, down -4.3% and -2% respectively.  All major Eurozone economies saw declines, with the worst being the Netherlands with a -7.8% decline, likely due to the energy sector.  Overall Eurozone industrial production has stalled below the 2011 level, and output has remained around 10% below the peak of the 2008 financial crash.

In China, GDP growth slowed to 6.7% in the second quarter, but still outpaced forecasts by +0.1% according to the National Bureau of Statistics.  While slower than in previous quarters, the second quarter expansion was well within Beijing’s official target range of between 6.5% and 7%.  Monetary leaders in China are continuing their efforts to shift the world’s second-largest economy away from exports and investment and towards consumption and services.

In Japan, the government cut its growth forecast sharply amid speculation that it may soon unveil a new stimulus package.  The new forecast is for GDP growth of +0.9% this fiscal year, down from January’s estimate of +1.7%.  Analysts believe that Prime Minister Shinzo Abe is preparing a new stimulus package that could be as large as ¥20 trillion ($192 billion), and Japan’s Nikkei stock market index rocketed higher in anticipation.

Finally, it is believed by most that the highest-earning racial/gender grouping in the U.S. would obviously be college-educated white men, right?  It’s obvious!  Whether because of discrimination, gender bias, access to opportunities or simply happenstance, that’s the universally-held belief.  Except that it isn’t true.  The highest earning racial group among the college-educated of both genders in the U.S. is…Asian. 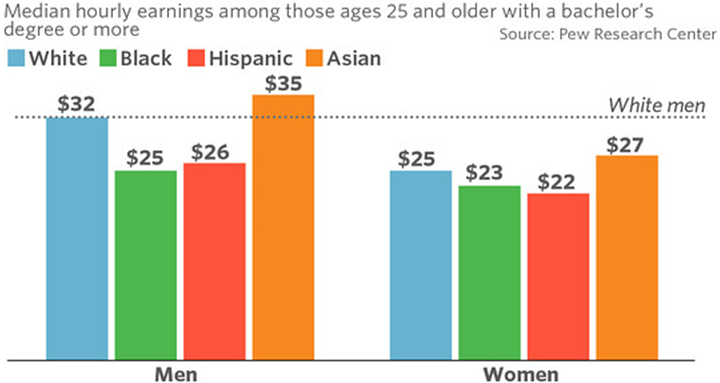