U.S. stocks traded higher for a fourth consecutive day Friday, with the S&P 500 regaining almost all of the Brexit-related declines.  All major U.S. indexes were up, with the Dow Jones Industrial Average, rallying +548 points to 17,949, a healthy gain of +3.15%.  The tech heavy NASDAQ composite and LargeCap S&P 500 notched gains of +3.2%.  MidCaps and SmallCaps were not quite as strong, with the S&P 400 MidCap index gaining +2.92% and the Russell 2000 SmallCap index rising +2.59%.  Despite the “risk-on” nature of the week, even the defensive Dow Utilities index rallied over +4.4%.

The month of June was tumultuous, to say the least, but the whole-month results were almost boring.  In the U.S., the worst performing index was the NASDAQ Composite, at -2.13%, while all other U.S. indices were within the narrow range of flat plus or minus 1% - remarkable given all the late-month volatility: LargeCap S&P 500 +0.09%, Dow Jones Industrial +0.80%, MidCap S&P 400 +0.23%, SmallCap Russell 2000 -0.23%.  International indexes were both the best and the worst: Developed international markets (EFA) lost -2.42% while Emerging International markets (EEM) gained +4.56%.  The shiniest return for June was in Gold, which gained +8.47%.

U.S. house prices, according to the S&P/Case-Shiller 20-City Index, were up +5.4% versus a year earlier.  As usual, there was sharp division among metro areas.  Super-hot metro areas like Portland, Seattle and Denver continue to see double-digit annual price gains, while home prices in legacy cities like New York and Washington rose only +2%.  None of the 20 cities showed a decline last month.  Nationally, prices are still about 11% lower than the peak in 2007, although 7 of the 20 cities have notched new highs.

Home sales, on the other hand, posted their first annual decline in nearly 2 years, due in part to a tighter home inventory.  The National Association of Realtors’ index fell -3.7% to 110.8 in May, from a downwardly-revised 115.0 in April.  Economists had forecasted a 1.0% decline.  The Realtors index forecasts future sales by tracking transactions in which a contract has been signed, but not yet closed.  NAR chief economist Lawrence Yun blamed the decline on an increasingly tight inventory rather than waning interest.  “There are simply not enough homes coming onto to the markets to catch up with demand and to keep prices more in line with inflation and wage growth,” he wrote.

Consumer confidence rose to an eight-month high in June as Americans became more optimistic about the economy, according to The Conference Board.  The “Confidence Index” subcomponent rose to 98 last month, beating forecasts by 4.5 points.  The “Consumer Expectations Index” for the next 6 months climbed to a five-month high of 84.5, up +6 points.  The “Present Conditions Index” also advanced to 118.3, the second strongest reading since the fall of 2007.  Respondents to the survey said they anticipated more job and income gains in the coming 6 months, which should help lift spending after the first-quarter slowdown.

Personal spending moderated in May following April’s strong +1.1% rise.  The Commerce Department reported that spending by Americans’ rose +0.4% in May, matching analyst expectations.  Incomes climbed less-than-expected, up 0.2%.  Jim O’Sullivan, chief U.S. economist at High Frequency Economics stated “The pick-up in consumption is a big plus for [second quarter] GDP growth.”  Purchases rose +0.3% in May after a +0.8% increase in April.  Durable goods spending (items meant to last more than 3 years), climbed +0.6% after adjusting for inflation following April’s +2.6% advance.  Non-durable goods spending rose +0.5%.  Ex-food and energy, the price measure rose +0.2%, matching expectations, and is up +1.6% year-over-year through the end of May.

An indicator of economic activity in the Chicago-area surged in June, as a greater number of purchasing managers signaled improving production and new orders.  The Chicago Purchasing Managers Index (PMI) rose to 56.8, up +7.5 points into expansion (>50) territory.  The new orders sub-index rose to the highest level since fall of 2014, and order backlogs were the strongest since spring of 2011.  For the 2nd quarter as a whole, the Chicago PMI index fell -0.1 point to 52.2.

National U.S. manufacturing grew at the fastest pace in over a year according to the Institute for Supply Management (ISM) manufacturing index, which jumped to 53.2% in June from 51.3%.  The ISM reading is back to its highest level since February of 2015.  U.S. manufacturers are on their fourth straight month of growth following five months of negative readings (which was the weakest stretch since the Great Recession).  Companies have benefitted from recent mild weakness in the value of the U.S. dollar, which makes their goods cheaper overseas.  The ISM new orders gauge also increased to a 3-month high of 57% in June, up +1.3% from May.  The ISM report agreed with the Purchasing Managers Index (PMI) of national manufacturing conditions, which also hit a 3-month high in June, rising to 51.3 from 50.7.

Canada’s economy rebounded +0.1% in April, in line with analysts’ forecasts.  According to figures from Statistics Canada, the economy grew at +0.1% in April following a decline the previous month.  Economic output improved in the manufacturing and service sectors, but the important mining and oil and gas extraction segments continued to fall, putting a drag on overall gross domestic product.  Manufacturing rose by +0.4% for the month and +1.4% in the last year, driven mainly by transportation equipment manufacturing and primary metal manufacturing.

In the United Kingdom, Bank of England Governor Mark Carney warned that further stimulus measures may soon be needed for the United Kingdom, following the country’s vote to leave the European Union.  In a speech at the Bank of England in London he stated “the economic outlook has deteriorated and some monetary policy easing will likely be required over the summer.”  Some good news was also revealed, as the UK’s PMI manufacturing index increased to a five month high of 52.1 for June, up from 50.4 the previous month.  The International Monetary Fund said that Britain’s exit from the EU poses a “downside risk” to Germany’s economic outlook and that it may lower growth forecast for Europe’s biggest economy in the coming weeks.  The IMF’s mission chief for Germany Enrica Detragiache stated that “Britain is an important trade partner for Germany, and significant changes in the economic relationship between the two countries will have repercussions for Germany.”

In Asia, Chinese stocks posted their biggest weekly gain in a month as investors bet that China’s central bank would loosen monetary policy to cushion a possible drop in European demand for Chinese exports resulting from the Brexit vote.  In manufacturing, two gauges weakened in June, suggesting that China’s economy slowed in the second quarter.  The official manufacturing Purchasing Managers Index (PMI) fell -0.1 point in June from May, while the nonmanufacturing PMI, which measures service sector activity, rose +0.6 point to 53.7.  In a separate private manufacturing gauge compiled by Caixin-Markit, manufacturing declined last month at the fastest pace in four months.  Taken together, the data suggests that China’s second quarter GDP may trail the first quarter’s annualized +6.7% rise.

Japanese industrial output fell for the sixth consecutive month, down -2.3% in May from April, according to the Ministry of Economy, Trade and Industry.  The miss was larger than almost all private forecasts.  Factories were affected by weak international demand and the aftershocks of a recent earthquake near the country’s manufacturing center.  Retail sales were flat in May and showed a monthly drop in exports, leading to analysts’ concerns that Japan’s recovery is unstable.

Finally, as we reach the halfway point of the year we can now look back and ask the question “where in the world were the best places to be invested in the first half of 2016?”

The answer is - as shown in the chart below - in some pretty unexpected places.

Argentina led the study with a gain of over +25%.  The nation’s Merval index recovered after President Mauricio Macri took office in December.  True to his campaign promises, Marci eliminated most capital controls in the country and moved to make deals on debts still lingering from the country’s 2001 default.

Next on the list is Russia, up almost +23%.  Some might remember that President Obama’s White House Press Secretary Jay Carney proved that he should not be in the stock prediction business when he proclaimed in March 2014 that investors should “not invest in Russian equities right now.”

Note that the returns would not be easily available to a U.S. investor, as they are expressed in each country’s own currency. 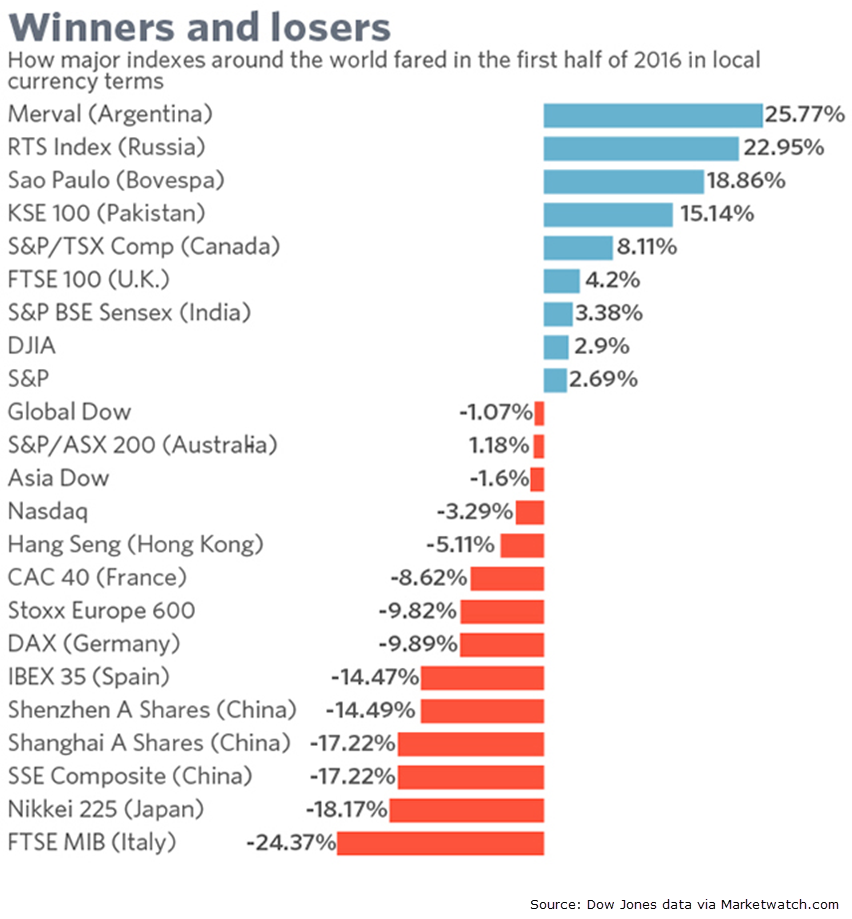