In international markets, Canada’s TSX ended down -0.97%. The United Kingdom’s FTSE continued to see weakness, down -1.55%. British voters are going to go to the polls next week to vote whether to stay in the European Union or leave – the so-called “Brexit” vote. On Europe’s mainland, weakness was seen across the board with France’s CAC 40 down -2.62%, Germany’s DAX index down -2.07%, and Italy’s Milan FTSE down -1.15%. In Asia, markets had a very difficult week where Japan’s Nikkei plunged over -6%, Hong Kong’s Hang Seng index fell over -4.15%, and China’s Shanghai index ended the week down -1.44%.

In U.S. economic news, Initial jobless claims rose more than expected, up +13,000 to 277,000 last week, according to the Labor Department. However, analysts are quick to point out that the increase was primarily due to 19,470 claims in California that are “probably due in part to schools closing for summer recess,” a Labor Department spokesman said. The median forecast of economists surveyed had expected 270,000. Continuing claims increased by +45,000 to 2.16 million for the previous week. These claims, reported with a one-week delay, reflect people who are already receiving unemployment checks.

In housing, the National Association of Home Builders (NAHB) sentiment gauge rose 2 points to 60, the highest since January. Economists had expected a 1 point gain. Readings over 50 indicate growth. All the main sub-indexes rose, including confidence about future sales. The NAHB noted “Builders in many markets across the nation are reporting higher traffic and more committed buyers at their job sites—but some headwinds remain, including a scarcity of available lots and labor.”

Actual housing starts fell -0.3% in May to an annualized rate of 1.164 million units, according to the Commerce Department. That follows a +4.9% increase in April and is better than the 1.15 million expected by economists. Building permits, a gauge of future construction activity, rose +0.7% to 1.138 million. Monthly housing starts have hovered above 1 million for the past year, but remain below the 1.5 million that represents a very healthy housing market. On a positive note, housing starts are up +10.2% so far this year.

Small business optimism rose for a second straight month in May, according to the National Federation of Independent Business (NFIB). The NFIB’s small business index rose to 93.8 last month, up +0.2 point from April, and 12% of companies plan to add staff, up one percentage point. 27% of companies reported that they had unfilled job openings. But sales and earnings trends weakened, with fewer firms planning to step up spending, even though pessimism about the economy diminished.

Retail sales increased +0.5% last month, beating expectations as consumer spending remains strong, according to the Commerce Department. Economists had expected retail sales to rise +0.3%. Ex-autos, sales rose +0.4% and ex-autos and gas, sales were up +0.3%, both in line with expectations. Auto sales gained +0.5% versus April as industrywide demand was slightly stronger than expected. Nonstore sales, which represents e-commerce sales such as Amazon’s, continues to outpace overall retail sales-- up +1.3% in April and a whopping +12.2% versus a year earlier.

Consumer prices rose +0.2% in May, missing forecasts by 0.1%, according to the Labor Department. Core consumer prices, which exclude food and energy, also rose +0.2% matching expectations. Energy prices gained +1.2% as gasoline prices increased. Shelter costs rose +0.4%, the biggest monthly gain since 2007. Year-over-year consumer prices are up +1%, but down slightly from April’s reading. Core inflation was 2.2%, up +0.1% from April.

Producer prices rose for a second straight month as the cost of energy products and services increased, but a stronger dollar and lower energy prices is expected to keep inflation in check for a while. The Labor Department said its producer price index for final demand increased +0.4% last month, following a +0.2% rise in April. Year-over-year, producer prices are down -0.1%. Economists had forecast the PPI to rise +0.3%. Excluding food, energy and trade services, producer prices dipped 0.1% last month, following a 0.3% rise in April.
Industrial production fell -0.4% last month, missing analyst expectations of just a -0.1% drop, according to the Federal Reserve. Manufacturing activity also fell _0.4%, also missing forecasts for a gain of +0.1%. Production of autos and related parts plunged -4.2%, the sharpest drop since early 2014. American producers are still battling the effects of weak energy prices, a stronger dollar, and stagnating global growth. On a positive note, mining output (including oil drilling) rose +0.2% - its first increase since August. However, drilling and servicing at wells dropped a further -7.9%. Those numbers may stabilize as analysts point to Baker Hughes rig count data that show that oil rigs are beginning to come back online. Capacity utilization, which measures the amount of plant capacity that is in use, fell to 74.9%, down -0.4%.

Manufacturing in the Empire state rebounded in June after a weak reading the prior month, according to the New York Fed. The Empire state manufacturing index swung to positive territory coming in at 6.0, up +15 points from the deeply negative May reading. A positive reading indicates improving conditions. Economists had forecast -3.5. Orders and shipments were also positive for June and the six month outlook also improved. In Philadelphia, the Philly Fed index rose to 4.7 signaling growth following May’s reading of -1.8. It was only the 2nd positive reading in the past 10 months; however, the details of the report were not optimistic. The indicators for new orders, shipments, employment and work hours all remained negative. The disparity is due to the fact that the headline value of the Philly Fed current conditions index is based on a single stand-alone question, unlike the Institute for Supply Management’s index which is based on a composite of components.

On Wednesday, the Federal Reserve voted to keep rates steady, which was widely expected. However, the Fed signaled that markets might still be too complacent about the chances for rate hikes later in the year. While economists don’t expect a hike at the next meeting in July, individual members’ projections for future policy still point to two hikes this year. Six Fed officials now see just one hike this year, up from just one back in March. Fed Chair Janet Yellen stated in a post-meeting press conference that the United Kingdom’s vote whether to leave the European Union later this month (“Brexit”), played a factor in the decision to leave rates unchanged.

In international economic news, the Conference Board of Canada stated that Canada’s economy is expected to grow by +1.5% this year, with British Columbia to lead the country in growth. Four provinces will have a GDP growth rate of more than +2%: British Columbia, Ontario, Manitoba, and Prince Edward Island. The Conference Board sees a “two-speed” Canadian economy, with resource dependent provinces in recession or growing slowly, and most of the rest of the country strengthening as manufacturing exports grow.

The Bank of England has issued a fresh warning that a vote to leave the EU in next week’s referendum risks impeding economic growth, forcing the pound lower, and sending shockwaves through the global economy. The Bank of England’s Monetary Policy Committee voted unanimously to maintain its bank rate at just 0.5% and to keep the size of its asset purchase program at 375 billion pounds.

German Chancellor Angela Merkel said China’s push to produce higher quality exports is turning the country into a competitor in global markets and underscoring European concern about Chinese trade and investment. Her three day trip to China included joint cabinet talks in Beijing and a chance to ensure that “diverging interests” between the two countries “aren’t swept under the carpet,” Merkel told reporters in Shenyang. Merkel said she and Chinese leaders had very intensive talks regarding China’s bid for market-economy status, which would make EU penalties against Chinese exports more difficult.

In Japan, the yen surged to its strongest against the dollar since the fall of 2014 as the Bank of Japan abstained from adding any stimulus that could slow its advance. Japan’s currency gained against all 31 of its major peers after Governor Kuroda and his board chose to continue to gauge the economic impact of their negative interest-rate policy. The dollar extended its losses that have made it the worst-performing currency this year behind the pound after the Federal Reserve kept interest rates steady and suggested the pace of further action will be slower than previously indicated.

Chinese domestic banks are lending large amounts of cash to boost the near-term economic outlook, despite the nation’s swelling pile of debt. New yuan loans rebounded to 985 billion yuan last month, surpassing all estimates, according to the People’s Bank of China. The central bank is determined to keep credit flowing so that its economy continues to grow, but at the cost of rising debt risks. China’s debt load is now 250% of its gross domestic product, according to Bloomberg Intelligence estimates.

Finally, are you favoring stocks right now because investment grade bonds are yielding a near 0% return? If so, Mark Hulbert, in a research piece published at MarketWatch.com, says that is a terrible rationale. To be fair, almost everyone seeks the return of stocks when bonds are yielding near zero. But his research shows that bond valuations have almost nothing to do with how the stock market is likely to actually perform. Over the past century, stocks have been just as likely to fall as rise when bonds have been less than an ideal alternative. To demonstrate this, he calculated the stock market’s performance since 1871 for various states of stock earnings yield vs the yield on the 10 year treasury note. What he found, as demonstrated by the chart below, is that there is no consistent relationship. The implications for investing are that you should base investing decisions in the stock market based on the stock market’s own valuation criteria, not on whatever the bond market may be doing. 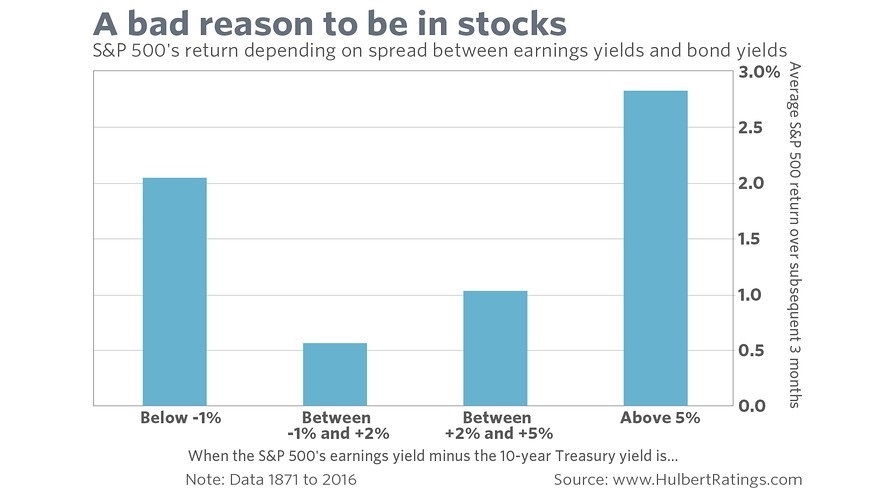