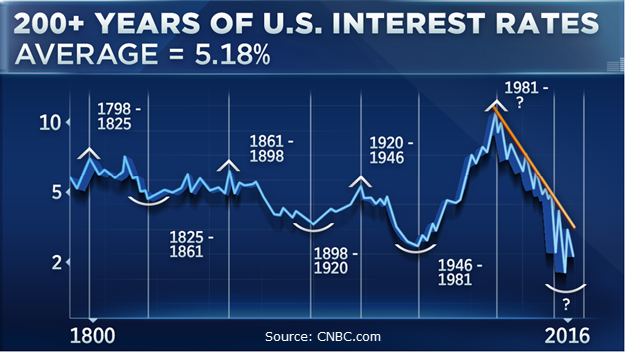 In commodities, precious metals had a second difficult week as Gold fell another $15.60 an ounce to $1208.70, down -1.27%.  Silver plunged even further down -4.36%.  Precious metals typically respond negatively to a rising dollar, and that has been the situation of late – in spades – as the dollar has ripped higher since the election all the way to a 14-year high.  The industrial metal copper gave back some of last week’s gains by falling -1.65%.  Crude oil rebounded following 3 weeks of losses, rising $2.95 a barrel to end the week at $46.36, a weekly gain of +6.8%.

In U.S. economic news, jobless claims are at a 43-year low as the number of people who applied for unemployment benefits last week fell by 19,000 to 235,000.  Initial claims have now remained under the key 300,000 threshold level for 89 straight weeks, the longest stretch since 1970.  The U.S. unemployment rate also remains near an 8 year low of 4.9%.  Continuing jobless claims, the number of people already receiving unemployment benefits, also decreased by 66,000 to 1.98 million - the first time that number has been below 2 million since mid-2000.

Sentiment among home builders remained unchanged in November, according to the National Association of Home Builders’ (NAHB) index.  The latest reading of 63 matched the median forecast among economists.  Current sales conditions and sales expectations were at 69, while the index of buyer traffic rose a point to 47.  Readings over 50 signal improving conditions.  Robert Dietz, the home builder trade group’s chief economist, said in a statement “Ongoing job creation, rising incomes and attractive mortgage rates are supporting demand in the single-family housing sector.  This will help keep housing on a steady, upward glide path in the months ahead.”

Construction of new houses jumped 26% last month to the highest level in 9 years, boosted by a spike in multi-family units.  Housing starts climbed to an annual rate of 1.32 million from 1.05 million in September, according to the Commerce Department.  Economists had expected only 1.17 million new starts.  Higher prices and a shortage of properties for sale have encouraged builders to step up construction.  New construction accelerated in all regions of the country, surging by more than +44% in the Northeast and Midwest.  Construction of apartment buildings, condominiums, and multi-unit dwellings were up +75% last month.  Single-family home starts rose almost +11%, the fastest pace since October, 2007.  Future building activity also looks promising as permits are running about +5% above year-ago levels.

Retail sales surged for a second consecutive month for the best two-month performance since early 2014.  October retail sales jumped +0.8% last month, following a +1% rise in September.  Economists had forecast a +0.7% gain.  With consumer spending a main driver of economic growth, the increase in retail sales suggests that the U.S. economy got off to a good start in the 4th quarter.  Alan MacEachin, an economist at Navy Federal Credit Union, stated “A solid jobs market is driving up household incomes and boosting spending power.”  A large portion of the gains were due to auto dealers where sales hit an 11-month high following strong incentive programs.  Even ex-autos and gas, sales were still up a healthy +0.6%.

Manufacturing in the mid-Atlantic region recorded slightly slower growth, according to the Philadelphia Fed’s manufacturing index.  The index slowed slightly to 7.6, down -2.1 points from September.  The index has remained above the 0 level, indicating improving conditions, for four consecutive months.  Most sub-indexes remained positive with general activity, new orders, and shipments all recording strong results.

Inflation at the wholesale level remains low, coming in unchanged for October, but the reading follows several years of weaker prices.  Higher costs for natural gas and gasoline were offset by declines in food and services.  Taking a long-term view, over the past 12 months wholesale costs have risen +0.8%, the highest one-year change since the end of 2014.  Stripping out the volatile food, energy, and trade margin categories yields the so-called core producer prices.  That measure is rising at an even faster rate, up +1.6% over the past 12 months, the fastest in 2 years.  If these trends continue, higher wholesale prices will eventually lead to higher prices for consumer goods and services.

Consumer inflation rose at the fastest rate in 6 months, according to the latest Consumer Price Index (CPI) reading.  The Labor Department reported that the index rose +0.4% last month, after rising +0.3% in September.  On an annualized basis, the CPI is up +1.6% - the biggest year-over-year increase since October of 2014.  The increase was in line with economists’ forecasts.  Core inflation, which strips out potentially volatile food and energy costs, climbed +0.1% last month.  Annualized, core inflation is currently 2.1% - right in line with the Federal Reserve’s 2% inflation target.  The firming inflation along with the labor market approaching full capacity leads many analysts to believe that the Federal Reserve will have the green light to raise interest rates at its December 13-14 policy meeting.

Industrial production—a measure of output from America’s factories, utility plants, and mines—was unchanged in October, said the Federal Reserve, as a sharp drop in utilities production was offset by modest gains in factory output.  Economists had forecast a +0.2% gain.  In the details of the report, manufacturing output rose +0.2% and mining output jumped by +2.1%, but utilities production plunged 2.6%.  High Frequency Economics chief U.S. economist Jim O’Sullivan said in a note to clients “Through the volatility, the trend in manufacturing appears to be at least modestly positive, and the oil-drilling-led plunge in mining seems to have ended.”  Capacity utilization, a gauge of slack in the industrial economy, ticked down 0.1 percentage point to 75.3% last month in line with expectations.

In international economic news, the Bank of Canada said it won’t necessarily move in lockstep with the Federal Reserve if the U.S. central bank hikes its key interest rate next month, a move which is widely expected.  Deputy Governor Timothy stated “We are free to adjust our policy interest rate in the context of Canadian economic conditions—and in particular, we do not need to move in step with the Federal Reserve” in a speech in Waterloo, Ontario.  Mr. Lane pointed out that Canadians will no doubt feel the reverberations from whatever the U.S. does.  Higher U.S. interest rates will likely push the Canadian dollar lower, boost exports, and push up some Canadian rates.  As a net importer of foreign capital, Canada’s economy is exposed to the “vagaries of global flows”, Mr. Lane acknowledged.

In France, Emmanuel Macron formally declared that he will seek the French presidency in next year’s election, ending months of speculation.  The 38-year-old former economic minister and protégé of President Francois Hollande left his government post in August saying he wanted more freedom for his ideas to repair France’s ailing economy and growing social divisions.  Macron created his own political movement known as “En Marche” roughly translated as “On the Move!” and remains a popular political figure.  His platform offers voters a pro-EU platform, in contrast with the National Front party of Marine LePen, the current front-runner.

German economic growth slowed in the third quarter of the year, hampered by weaker exports.  Europe’s largest economy grew by just +0.2%, half the rate of the second quarter and far below the first quarter’s +0.7% advance.  Germany’s Federal Statistics Office stated "Exports were slightly down while imports were slightly up compared with the second quarter of 2016.  Positive impulses on the quarter came mainly from domestic demand.  Both household and state spending managed to increase further."  Some analysts stated that the uncertainty caused by Britain’s vote to leave the EU may have counteracted the country’s solid domestic activity.  In addition, worries of a more protectionist U.S. economy added to fears.  ING Bank economist Carsten Brzeski said, "If Germany's single most important trading partner, the US, really moves towards more protectionism, this would definitely leave its mark on German growth."

In Asia, the election of Donald Trump may have put China in the driver’s seat for a new trade deal in the Pacific Rim.  A decade-old plan for a free-trade area in Asia is set to be resurrected at a meeting of Pacific Rim country leaders in Peru, as the region works on an alternative to the U.S.-led Trans-Pacific Partnership.  Donald Trump had taken a strong anti-TPP stance during his campaign.  Leaders are looking to resurrect the Free Trade Area of the Asia Pacific (FTAAP).  Completion of the deal would hand Chinese President Xi Jinping the reins in a most important geopolitical shift.

In Japan, Goldman Sachs chief Asia Pacific economist Andrew Tilton released a note that a firmer U.S. dollar is positive for Japan, even as Donald Trump’s victory cast uncertainty over the Asian economic outlook.  The dollar surged to a 14 year high against a basket of major currencies and U.S. debt yields hit nearly one-year highs on expectations that Trump’s policies will boost the U.S. economy.  Tilton told the Reuters Global Investment Outlook Summit in Hong Kong, "More Fed tightening and a stronger dollar is probably good for Japan.  Japan is a very low-inflation country that is trying to stimulate the economy... but can't really lower rates feasibly much further.  So if the U.S. can raise rates and raise the currency versus the yen, then yen can depreciate without Japan having to do anything else.  For Japan, this is great news."

Finally, treasury yields have soared following the surprising election of Donald Trump for President of the United States.  Theories abound regarding the causes and consequences of the move, but as always it is good practice to step back and take a look at the big picture.  Veteran technical analyst Louise Yamada, in a CNBC interview, looked at interest rates in the U.S. over the last 200 years and draws our attention to a few points.  First, according to Ms. Yamada, is that interest rates are most likely to only go up from here.  Yamada refers to an apparent “bottoming formation” that has been forming over the last several years.  On the 10-year Treasury note, a move above 3% would confirm her assessment because that’s the “level at which we can definitively say that rates have reversed”, Yamada states.  Yamada predicts that higher rates will boost equity prices in the near term, as in past cycles.  However, she will be watching the roughly 5% level where “you’ll start having problems.”  10-year Treasury notes finished this past week at 2.34%, so we’re a long way away from her danger zone. 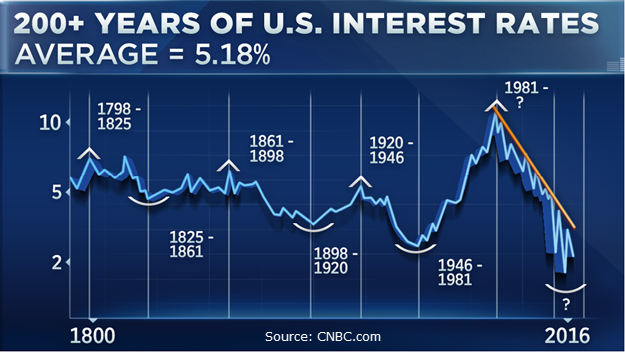