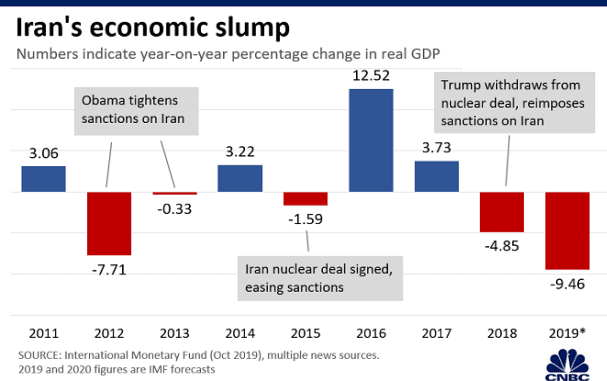 Following America’s killing of top Iranian general Qasem Soleimani in an airstrike, Iran responded with a missile barrage on U.S. interests in Iraq.  Some feared war was inevitable, and Google searches for “World War III” spiked.  However, officials from both countries have insisted they’re not interested in seeking an all-out war.  Despite the humanitarian costs a war would bring to both countries, economists have pointed out the main reason Iran isn’t interested in a conflict is simple: it can’t afford it.  With inflation running at more than 30%, curtailed oil exports, and a dramatically shrinking GDP (see chart below from cnbc.com), Iran is in no position to take on the financial burden of a war with the US or any other major power.